The Unsubscribe link and Unsubscribe text features allow you to give your prospects an easy and direct way to let you know they want to receive no more emails from you. It will also help you to avoid issues with spam.

The unsubscribe features are built upon the custom field function (unsubscribe_url and unsubscribe_txt). If you’re not familiar with the concept of custom fields, it’s a good idea to start by getting acquainted with them in this article.

Our latest research shows, that customers with an unsubscribe text achieve better deliverability results, so we recommend to use this option! That's why we included it in the template by default (of course you can delete it if you want, but we suggest keeping it - it's best to change it a little bit so that you have your own unsubscribe text).

When your prospects click on the link, they will be redirected to a website asking the prospect to confirm that they want to unsubscribe, looking like this:

Once the prospects click the "Unsubscribe" button, Growbots tracks the clicks and reacts by stopping the sequences that are ongoing for these prospects. It additionally assigns the appropriate status to them (unsubscribed). This is the final notification the prospects sees:

NOTE: Keep in mind that if you use the Unsubscribe link, the prospects will no longer need to reply in order to unsubscribe, so it might impact the response rate of your campaigns.

We encourage you to test the unsubscribe links you build into your messages before sending them to your prospects. The best way to test an unsubscribe link is to send the sequence to yourself as a prospect. Simply create a new project where you import yourself (or your colleagues) as prospects and schedule the message. Here's an article showing you how to import your own prospects.

NOTE: Please keep in mind, that even if the prospect clicks on the unsubscribe link, you’ll still be able to manually start a new campaign for them. And if you choose to delete them, it will not prevent you from generating them again in the future.

If you want to include an opt-out possibility to your emails, but don't want to include the link (according to our research, the link can decrease your deliverability), you can always use the unsubscribe text message. According to all email providers it's enough to leave an opt-out possibility like this, so it's perfectly fine for your deliverability to have it.

You can put the message via the custom field at the side of the template, and once you click it the unsubscribe text will appear in your message. It's also added to all new templates by default, but you can easily modify or delete it (eg. if you prefer to use the unsubscribe link).

When you include the text, you'll get some replies in which prospects ask to remove them from the mailing list. Then you will have to change their status to Unsubscribed in the app yourself. This way you can make sure that the system won’t allow you to resume a sequence for prospects with this status. It’s also impossible to transfer such prospects to another campaign by accident. You can find this option when clicking on Actions -> Unsubscribe: 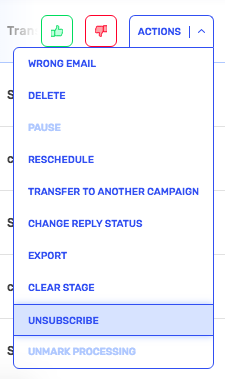