How many messages to send using Warmbots

How to adjust the Warmbots sending limits

You can easily adjust the number of messages sent by Warmbots by going to the email integration settings - you can do that straight from the Warmbots dashboard:

or by going to Settings → Email accounts → Edit settings:

Here you can monitor the results of the warm up process - just go to your main Growbots dashboard and switch the tab on the top to Warmbots:

Here you can see the progress of the warm up process, the current SPAM rates for your email accounts and the Status of your inbox.

Warming up - it means that the Warmbots is ramping up the number of sent messages and is building the reputation for this inbox. You shouldn't start sending any campaigns with this email just yet - wait the number of days specified below the status and check the status. Once it changes to Good - you're good to go.

Good - this status means that the deliverability for this email account is on point and you can send out your campaigns. Just remember not to change your daily sending limits drastically, keep them below 150/day and maintain stable sending habits (try not to send out 148 messages on one day, and 23 messages on another day).

Medium - this status means that your deliverability has recently dropped and some of your messages started landing in SPAM. At this point it's recommended to lower your daily sending limits for this email account to about 30 messages/day. Once you do that, keep monitoring the status and once it changes to Good - you can start increasing the daily sending limits by 30 every 2 weeks.

Poor - when you see this status, it's strongly advised to pause all the campaigns going out from this inbox and make sure that Warmbots is set up to send out the maximum number of messages per day, so that it rebuilds the reputation of this inbox as soon as possible. The process of rebuilding the reputation can take up to 1-2 weeks. Keep monitoring the Warmbots status, and once it changes to Good - you can start sending out your campaigns again.

On the Warmbots dashboard you can also see the status of your DNS records. If it shows that one or both of the DNS records are not set up correctly, please take a look at our article on General DNS setup and add the remaining DNS record(s) to ensure better deliverability. 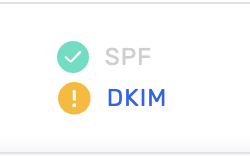